I recently completed the 100km Trailwalker in a little over 28 hours as part of the team of “Inglorious Blisterds”. In doing so, we raised a little over £2,000 for Oxfam and the Gurhka Trust.

(Soon to be a major motion picture featuring: Jeff Zie, Bob Hogan, Sweyn Martin and me, walking. With Mark Wright in the support van with Sophie Zie-Carreras, and Caroline Gilby)

It is not too late to sponsor us as the link will be open for up to 2 weeks after the event.

I am now recovering, and considering how decades of Scouting, hiking and walking have prepared me to take on such an EPIC challenge and succeed.

How hard was it?

I can summarise this extremely quickly: it was the hardest thing I’ve ever done both physically and mentally.

Let us have a quick look at the statistics –

And it is a team sport, not an individual one. The whole team needs to get round. So you have to support each other, you have to keep your morale up, and you need to be completely committed not just to your own health and well-being, but to that of every single one of your teammates.  Then, on top of that, it is not just a physical and mental effort, but a huge logistics and support problem requiring over 110 person hours of support from our friends and families. Across 12 meeting points, our support team had to be there at a map reference and be ready to deliver food, drink, prescription and painkilling drugs, changes of clothes, first aid, and morale support. The support team deserved medals as well!

So, yes, it is really pretty darn difficult.

What Preparation was required?

By December last year, an aggravated back injury had required me to go in for surgery. In the first week of December, I was, more or less, unable to walk more than 100 m unaided. I was in constant pain, and unable to sleep. I was rapidly losing the use of my left leg through nerve damage. I underwent a minimally invasive lumbar decompression operation under the very skilled hands of Mr Rodney Laing in Cambridge. So, at the end of the first week of December 2013, I was effectively learning to walk normally again after a year of painful limping. I was lucky to have a great deal of help from Alastair at the ICE clinic in Ampthill as my physio as well. For once in my life I actually listened to my medics, my GP and my Physio and did the exercises.

This is the schedule of training that I wrote back then as a way to track my progress over the first 7 months of 2014.

In between the major events on the list, and a few others that aren’t on the list, I walked as many weekends as I could – doing 10 to 12 miles and around 1,000 ft of hill work on each of those weeks. And around that, I modified my daily routine to include as much walking, as many stairs, and is much bending and stretching as I could. Training this pretty much took over my life.  If anyone asks, this is an event that requires you either to be already fit enough to walk 50 miles and around 5,000 feet of climb non-stop, or have between 70 and 100 hours of time available to training over 6 months.

So, just saying yes to a place is a huge undertaking, before you even make it to the start line.

What does the event need?

If you are on an early start, you are going to need a tent, some overnight stuff and a sleeping bag.

I took 2 pairs of boots, both new, as I had worn out two previous pairs in training. I alternated between a pair of Salomon GTX (for their lightness and stiffness was excellent in protecting my feet from the rocky ground) and a pair of Merrell Grassbows (for their softness and lightness and excellent breath-ability). I think I could have usefully had a non Goretex pair just to handle the heat as well. Two pairs of footwear means one pair can dry and cool in the van while the other gets hot and sweaty.

I also got through a fair amount of clothing:

All of that, across for people, meant that having a support van was a really excellent idea. Given the distances and effort involved, carrying all of the kit required at all times, would have been an unnecessary additional burden.

Yet, underneath all of that technology and equipment, the only really important item of equipment was a fragile human body and overheated human mind.

Actually, my memory of the event itself is pretty much a blur. Some athletes I know are blessed with the ability to remember every step, every stroke, every blow or volley. Not me. I mean, I know I was there, but I really don’t remember very much. I can remember setting off, as we barely made it to the start line in time. I’m not sure it is possible to forget Gurkha bagpipers cheering you across the start line.

I know that we walked the first 20 km without support while support group got organised and tidied up after us at the base camp. I remember being very pleased to see them at checkpoint 2.

By then, the sun was already fully up, temperatures had soared, and I was alternating between rubbing sweat out of my eyes and drinking isotonic’s. After that memory gets a bit patchy. All of the checkpoints were run with perfect efficiency, were astonishingly friendly, and were full of amazing support. One checkpoint sticks out, as we sat down on benches in full sun only to have a shady tent erected over us by some superefficient Gurkhas. They literally think of everything.

We met amazing people. Some were walking through injury and the heat. Some were silent. Some were singing songs. Some, whom our entire team wish to repeatedly stab with walking poles, were playing modern Euro pop from speakers on their rucksacks. I vaguely remember being passed by a couple of groups of Gurkhas who ran the entire 100 km in about 9 hours 36 minutes.

Just think about that for one minute: they ran 100 km in under 10 hours in blazing sunshine, up and down nearly 8000 feet of rocky paths. Having done that, they showered, put the uniforms on, and then went back to duty serving food, handling the administration, passing signals, and generally being amazing soldiers. And they did all of that without once, not even for a second that anybody saw, dropping their most amazing smiles.

And then it was night time, and it still didn’t get cold. I’m not sure I’ve ever been in the position of sweating constantly from sun-down to sun-up in the United Kingdom.

Another checkpoint sticks in the mind for making us walk around 3 sides of the square, and then in an act beyond human cruelty, welcoming us in with the screeching horror of vuvuzelas. No person should ever have to suffer that.

Through the night there were little trains of people with Christmas lights on their rucksacks, or head torches, or hand torches, or little lanterns. Little trains of people that went up over hills, along the ridges, and down the other side. All through that night, in the hot still air, cheerful (and not so cheerful) voices could distantly be heard along the South Downs Way.

Somewhere around here we passed the ”doko” team of young Gurkhas. Because the course is not hard enough, apparently, they do the entire course carrying 25 kg wicker basket of rocks on their backs supported by a forehead band. And they do this because it is symbolic, because they can. And when you see them, you realise that anything that you are suffering, anything that hurts, any doubt that you had as to your own ability to complete this, utterly vanishes in the face of their awesome physical and mental strength and bravery.

And then the sun came up again, and the temperature shot straight up the thermometer and we still had 20 km to go. And then 10. And then one. And then we could see the great big finish line sign at Brighton racecourse.

And then it was over, and a very nice man in a very smart uniform shook our hands very firmly and gave us wonderful medals. I think we were all feeling pretty tearful at that point.

The best bit? Finishing as an entire team.

The next best bit? Gurkha curry. That really is the food of the gods. 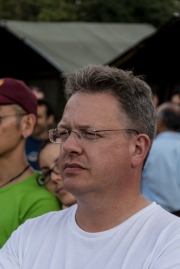 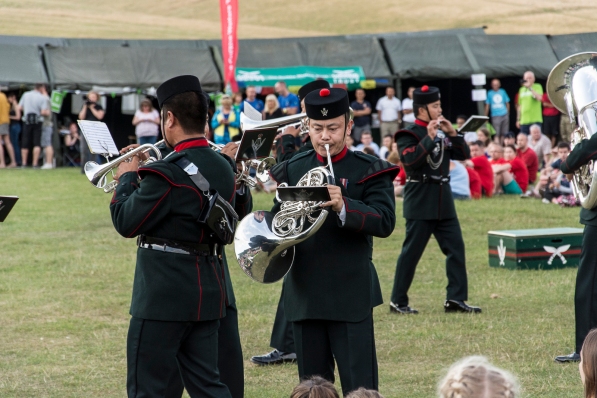 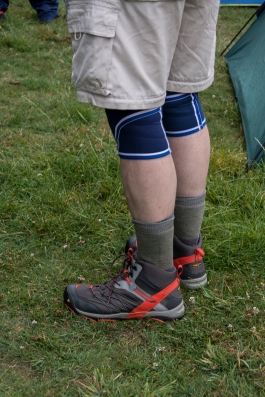 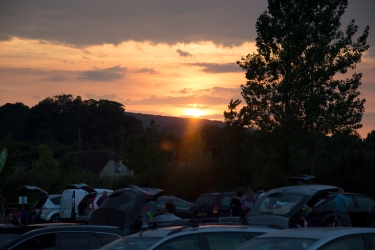 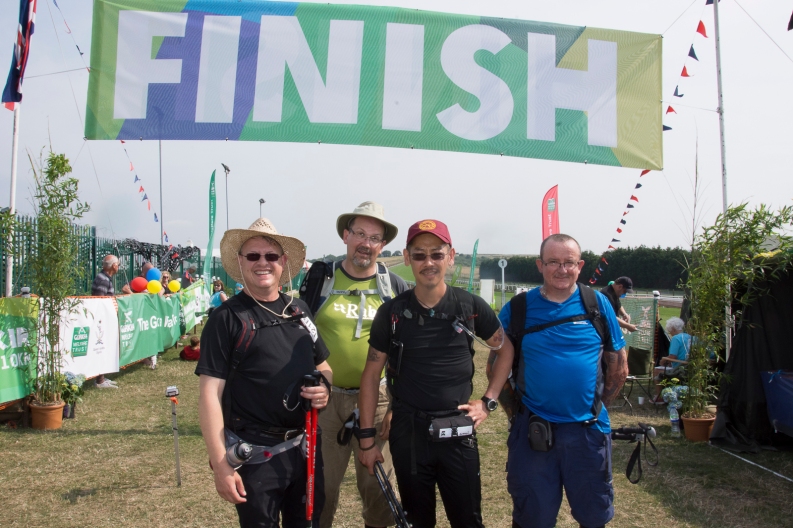 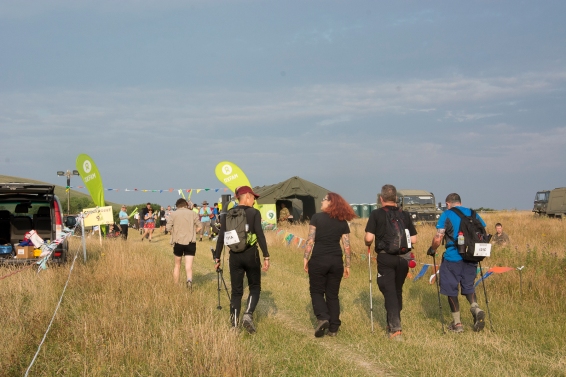 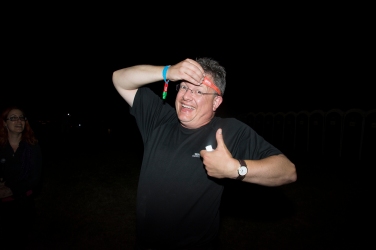 But why do it at all?

Because, ultimately, for me walking is one of the very greatest ways of finding myself. It is not about the challenge for me, is not about the effort, or the difficulty. It is about finding a little bit of peace and quiet in a very noisy world.

Should you do it?

That is really a question for you.

I’m honestly not sure that I would recommend it to everyone. It is hugely difficult. It is very painful. The kits required to participate is expensive, and a lot of it will be used up or worn out. It carries significant risks of damage to health and injury. It takes a very large amount of time to train for, and eats up a long weekend for the event. You will probably need a few days to recover fully afterwards. There are easier ways to raise money for charities that you support. There are definitely easier ways to get fit. There are probably easier ways for you to put yourself at existential risk.

BUT When all is said and done, however, this will be the defining physical challenge of a lifetime for many, many people. And if one of those people is you, then I tip my hat to your bravery and dedication.